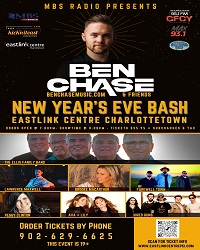 kick'n it open 2022 tour finally hits PEI to close out the summer tour that started back in May.

Since moving to Nashville, PEI’s own Ben Chase has just had the biggest year of his career, opening for major acts like The Zac Brown Band, Zach Bryan, Brett Kissel and Tenille Townes. He returns home on New Year's Eve to throw the biggest party on the island and is bringing some incredible PEI Talent: The Ellis Family Band, Peggy Clinton, Ava and Lily, Lawrence Maxwell, Brooke MacArthur, Hired Guns, and Farewell Town (NS). 8 acts all under one roof to kick off the new year, this is one memorable night you won’t want to miss.

Buy To This Event Directions