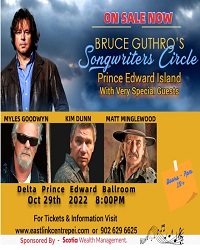 × Don’t miss this opportunity to see these world class musicians perform some of their most popular songs while sharing in the heartache, laughter, and original stories that brought the songs to life.

Bruce Guthro - needs no introduction! With more than 1,000,000 records sold world-wide and the recipient of numerous awards, Bruce combines his musical talents with his quick wit and knack for taking the best out in his guests as they tell the stories behind their songs.

Myles Goodwyn – is a music legend leading legendary April Wine with 20+ albums released. Currently, Myles is a member of 3 different Music Hall of Fames and an ECMA Lifetime Achievement Award recipient. Myles is being inducted into his fourth Hall of Fame, the Nova Scotia Music Hall of Fame, this coming fall. As part of the highlights of the induction, Bruce Guthro is hosting a Songwriters Circle with Myles in it.

Matt Minglewood – has 14 album recordings, including 3 Gold Records, multiple ECMA Awards and Maple Blues Awards as well as 2 Juno Award nominations. With his accolades and stage presence, Matt is a music icon across Canada. Matt is a member of the Nova Scotia Music Hall of Fame and he has lifetime Achievement status with the East Coast Music Association and Maple Blues Awards. Matt has been rocking venues of all sizes for decades and he’s still touring strong.

Kim Dunn – Kim is a special talent on guitar, piano and vocals. As such, the bulk of his performances are in a supporting role along the sides of the who’s who of the East Coast music scene. He does have a successful solo career as well, winning multiple East Coast Music Association and Music Nova Scotia Awards

Bruce Guthro Songwriters Circle Don’t miss this opportunity to see these world class musicians: Bruce Guthro, Myles Goodwyn, Matt Minglewood and Kim Dunn; perform some of their most popular songs while sharing in the heartache, laughter, and original stories that brought the songs to life.

Show time 8:00 PM - doors open at 7:00 pm This is a 19+ event. NO REFUNDS OR EXCHANGES. Tickets can be purchased in person or by phone (902-629-6625) Monday to Friday, 11am to 5pm, or online anytime. Tickets ordered online or by phone may be picked up at the Eastlink Centre Box Office prior to October 28th at 4pm or at the Event beginning 1 hour prior to the show.

Buy To This Event Directions